The List Of Largest Banks In The United States

Banking is a significant industry in the United States. So huge that the combined assets of the ten largest US-chartered banks as of early this year totaled $12.39 trillion. That is similar to the nominal GDPs of Japan, Germany, the United Kingdom, and Turkey combined.

Do you want to handle all of your banking in one location? There is no scarcity of large banks in the United States. We have made the task easy for you to reach the best central banks because you'll typically have better access to branch services, a vast ATM network, and various products and services. 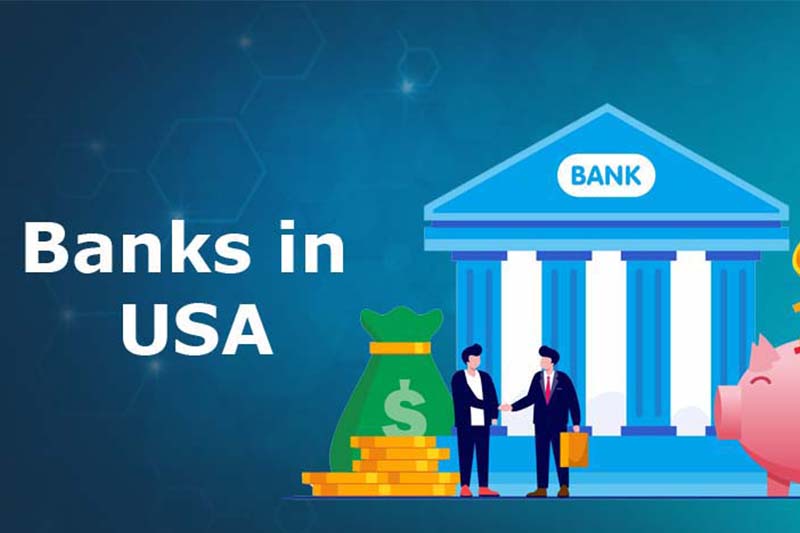 Here in this bank profitability graph, the US ROA graph has been going high. The global economy remains shaky as we approach 2023. Uncertainties abound due to an unprecedented combination of factors, including Russia's invasion of Ukraine, supply chain disruptions, a steep spike in inflation, and global monetary policy tightening. The risk of a mild recession or stagflation is significant in certain economies. The repercussions of a more fragile and turbulent global economy will be felt differently across the worldwide banking industry. Large, well-capitalized, diverse banks should be able to weather the storms reasonably effectively. 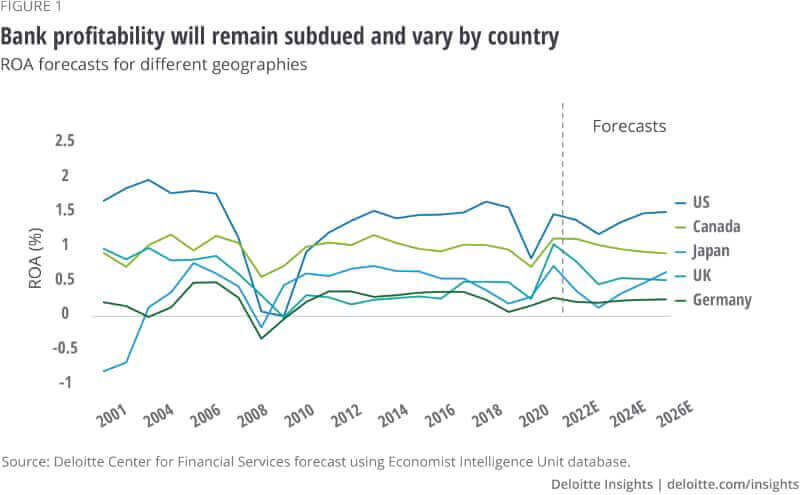 We looked at the domestic asset sizes of organizations that provide services to consumers and small companies to identify the biggest banks in the United States. Instead of investment banks, the list covers retail banks for consumer banking. Among other things, a bank's assets consist of the sum of its credit card, mortgage, and loan accounts. While some banks have tens of thousands of locations, others operate primarily — or entirely — online.

The List Of Largest Banks In The United States

These are the top ten banks in the United States regarding assets, with significant insights into how they got there, where they intend to go, and how smaller banks might stand out in a competitive business. 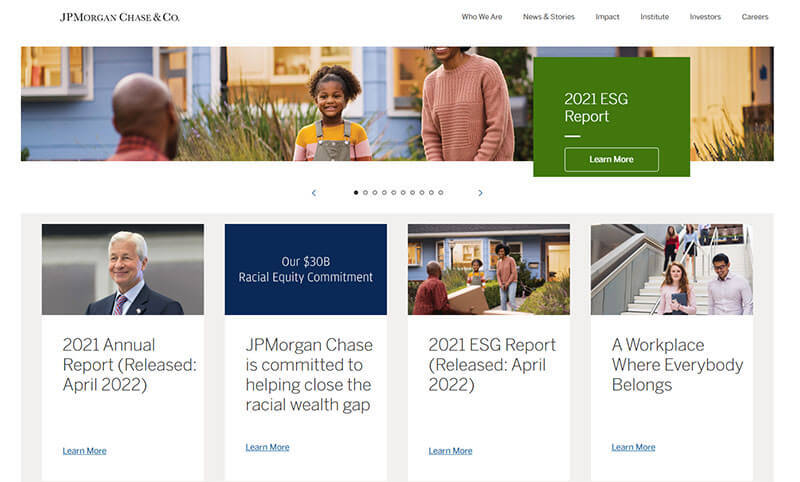 JPMorgan Chase has outperformed its competitors by targeting technologically aware consumers and using artificial intelligence (A.I.) in its offerings. JPMorgan is playing the long game by collecting millennials via digital channels to convert them to higher-value customers in the future. Furthermore, JPMorgan is substantially investing in banking technology, having any bank's most extensive I.T. budget in 2019 at $11.4 billion. These funds are particularly interested in identifying use cases for A.I. techniques, such as using voice assistants to provide investment banking clients with access to analyst reports and stock exchange data. Chase is growing its branch network in strategic markets. There are currently roughly 5,000 branches and 16,000 ATMs. Chase says about half of the country's households are their customers.

2. The Bank of America 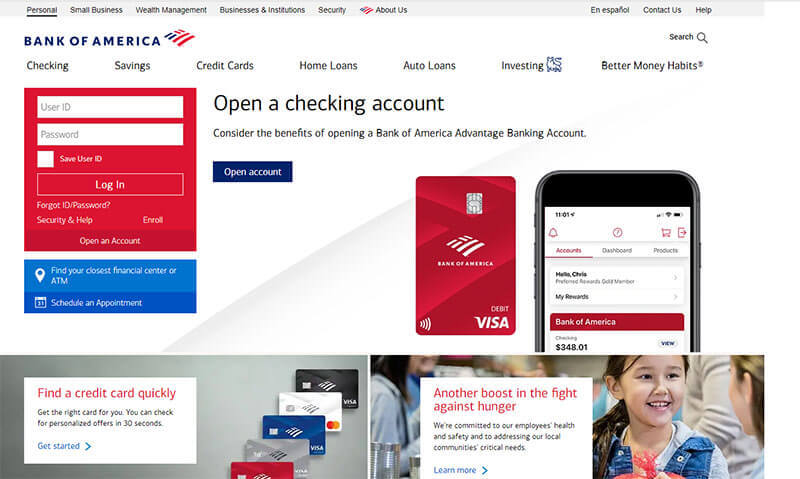 Source: The Bank of America

Bank of America has minimized expenses while appealing to young people by embracing digital-age methods. Only five months after opening, the bank's digitized branches, which allow customers to use contactless ATMs and connect with call centers via video-conference technology, had half the traffic of surrounding locations. Furthermore, the digital payments network Zelle enables users to transmit real-time payments to friends and family. Bank of America has enhanced user engagement by incorporating this function into its mobile app. 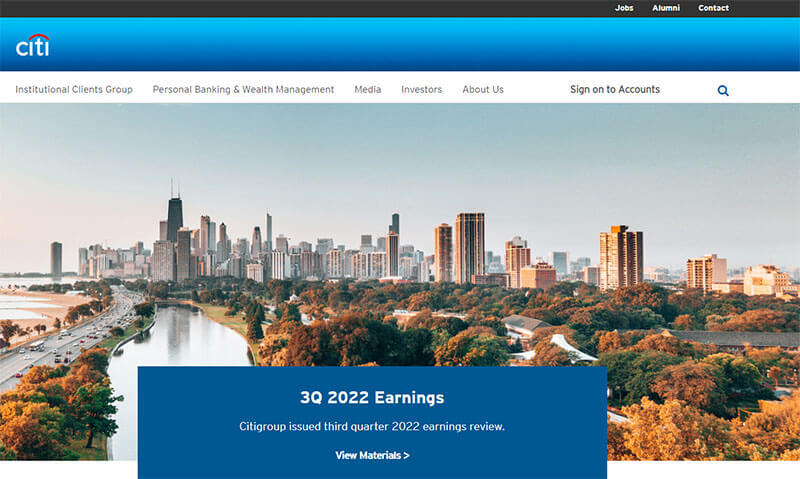 Kiplinger's Personal Finance has awarded Citibank the "Best Bank for High-Net-Worth Families" for the fourth year. Customers with $200,000 in deposit, retirement, and investment accounts are eligible for the Citigold Package. According to Insider Intelligence's Mobile Banking Competitive Edge Study, Citi ranked first in digital money management features as judged by consumers. Its in-platform features, such as the ability to check recurring charges and obtain a financial health score, contribute to Citi's ranking as one of the best banks in the United States. Citibank has 200 million customer accounts in 160 countries. Customers of Citibank have access to almost 700 branch locations and over 65,000 surcharge-free ATMs.

Wells Fargo is following in the footsteps of its leading competitors by targeting millennials with mobile banking services. Pay with Wells Fargo is a mobile marketing service that allows users to access their most frequently used payment options without signing into the app. Furthermore, Wells Fargo's Greenhouse app assists consumers in simplifying their expenses and tracking their expenditures. Wells Fargo has been restructuring its operations over the last year to focus on industries with high-income potentials, such as credit cards. According to Bloomberg, the financial services giant has a new suite of Visa credit cards that will directly fight a combined card from PayPal, Synchrony Financial, and Citigroup's Double Cash. Wells Fargo remains a banking empire in the United States, with 4,700 retail banking branches and over 12,000 ATMs. 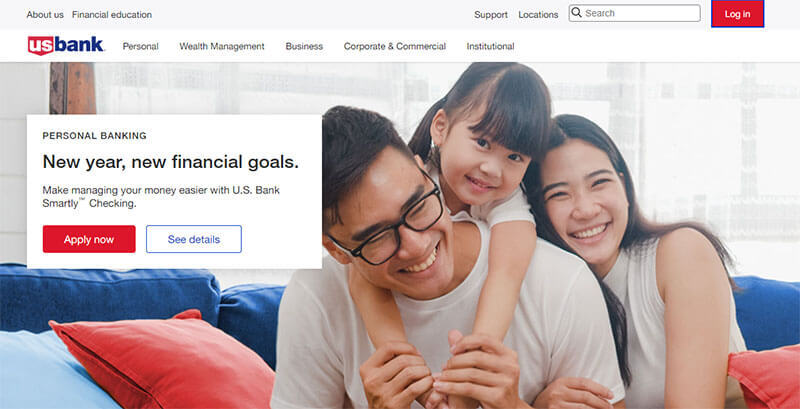 U.S. Bancorp, the parent firm of the U.S. Bank National Association, gained a spot on the list of top U.S. banks by pledging to fight with tech superpowers entering the banking business. With Facebook, Amazon, Apple, and Google all declaring plans to establish financial services, U.S. Bancorp was motivated to upgrade its technology. U.S. Bank operates 2,200 bank locations in 26 states. The ATM network collaborates with MoneyPass to provide clients access to thousands of ATMs nationwide. The banking app allows you to share your site while traveling to minimize delays in banking services away from home. 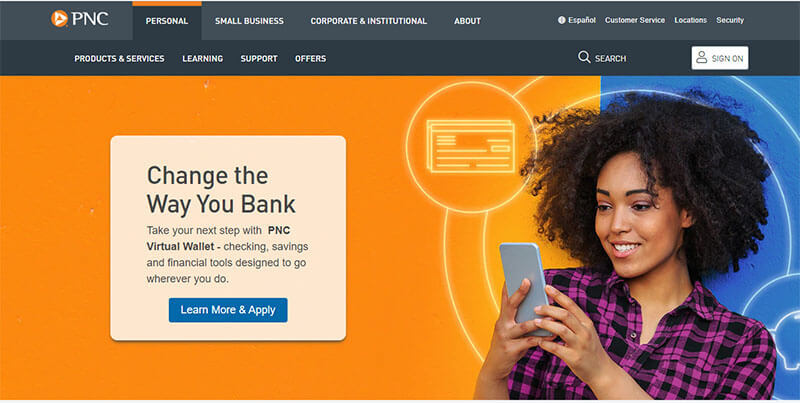 PNC Bank is a top U.S. bank specializing in customer benefits and unique goods and services. PNC, for example, provides mobile payment solutions to business clients with Visa commercial cards, enabling them to use popular mobile wallets such as Apple Pay. Furthermore, PNC has made initiatives to address fraud, a rising concern in the financial industry and the digital world, such as piloting credit cards with card verification values that are refreshed regularly. While thieves may be able to guess three-digit CVV codes pretty readily due to the restricted number of possibilities, changing CVVs regularly reduces the value of stolen data.

Truist was founded at the end of 2019 by Branch Banking and Trust Company. According to Federal Reserve data from 2019, BB&T and SunTrust were placed 11th and 12th in bank assets, respectively. The bank has over 2,000 branches in 15 states and provides consumer and commercial banking, asset management, and insurance products and services.

Goldman Sachs, a newcomer to the top 10, is a well-known multinational investment banking, management, and securities organization. According to Bankrate, its consumers have access to several financial services, including banking products through Marcus—its online banking section that debuted in the fall of 2016 and began issuing personal loans. While its investment banking arm took a hit in the third quarter of 2022, Goldman's consumer and wealth management revenue increased 18% year on year due to credit card balances and higher interest rates. Moreover, its fixed income is increased by 41% yearly, allowing Goldman to outperform analysts' expectations. The company has announced a complete makeover of its products and services to offset losses in other sectors.

In addition to having a significant international presence, T.D. Bank has grown to become one of the central banks in the United States as a result of its use of artificial intelligence and digital technologies. Clari, an AI-powered chatbot, has been launched in Canada by T.D. Bank in collaboration with KAI Consumer Banking. Clari responds to consumer questions via text messaging and alerts them when processing credit card payments. Because Clari has drastically reduced call volume in Canada, TD Bank is expected to develop a comparable chatbot for its U.S. locations. Another collaboration saw the corporation collaborate with fintech startup Amount to harness its digital lending technology portfolio, including fraud detection and account verification. 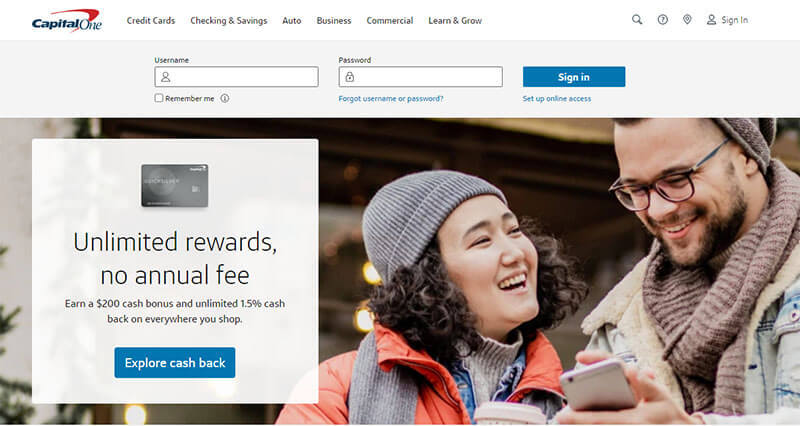 Capital One has been named one of the top U.S. banks, most likely due to its continued commitment to digital transformation. Capital One boosted their I.T. employees from 2,500 in 2011 to 9,000 in 2019, assisting in the debut of Eno, its AI-powered chatbot comparable to Erica at Bank of America. Despite its massive data breach in mid-2019, the bank ranked top in our Banking Digital Trust Report, leading in all six trust pillars: security, privacy, reputation, reliability, simplicity of use, and feature breadth. Capital One's strong results are likely due to its recent large-scale cloud migration, which has enhanced service continuity, expedited upgrades, and reinforced security standards to regain customers' trust. 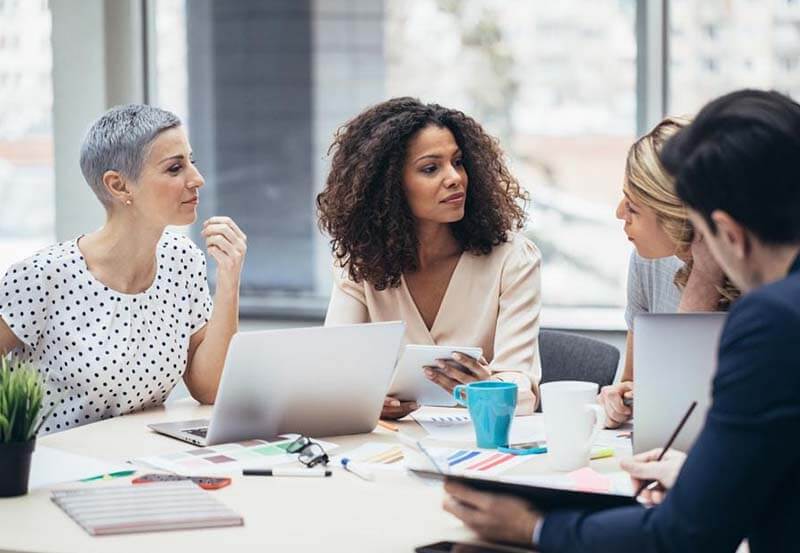 How To Find CEO Contact Details, Including Phone Number?

A simple Google search will not suffice if your buyer persona is a Chief Executive Officer. You'll need some robust methods to produce leads for your CEO email list, as well as phone... 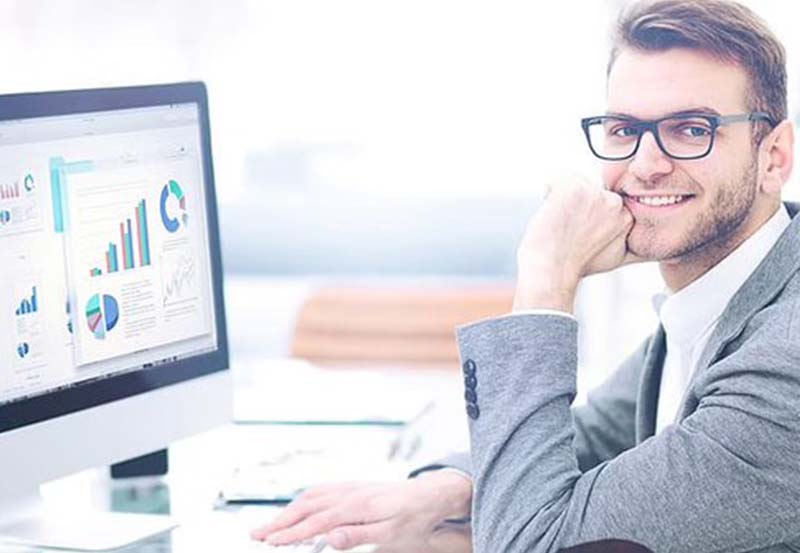 Are you searching for the top B2B Contact Data source for your company? Digital systems that collect, filter, and qualify vast quantities of contact databases—including full names, locations, positions... 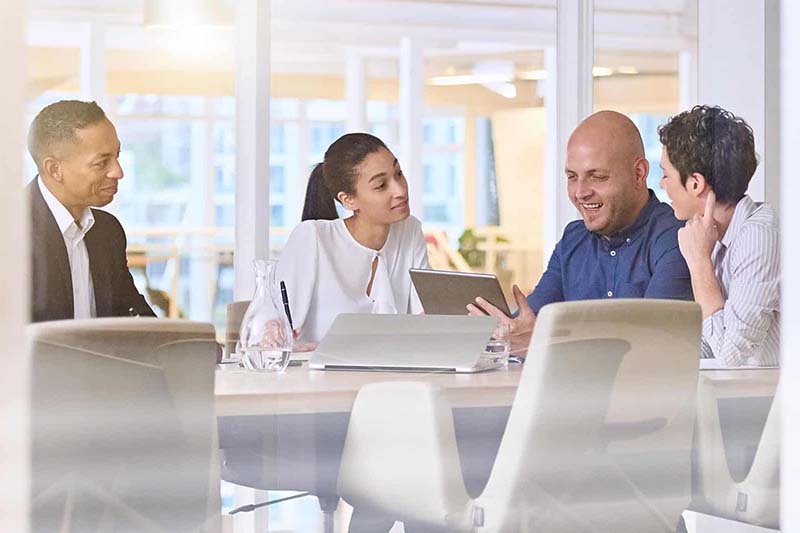 The majority of marketers promote their businesses via email as well as social media. Both are effective, and either can produce excellent results, but which one is more effective? Most businesses...